Take me to my flowering

Looking at this writing from my journal. Dream can take you to place of unfolding beauty – like flowers. Flowers are an important part of my new book ‘Earth Action’. Rosemary, who is helping me with some images to represent the book suggested some of Dale Bertrand’s photographs of Flowers.. so perfect as they are so beautiful and show the beauty of nature and he book is about protecting all of nature. I will share a few of Dale’s photos here.

“We are all flowers in the Great Spirit’s garden. We share a common root, and the root is Mother Earth. The garden is beautiful because it has different colors in it, and those colors represent different traditions and cultural backgrounds. — elder David Monongye, Hopi

After seeing this quote had dreams of flowers and flowering. I will include an excerpt from my dream dairy.

“Really enjoyed going up to the different levels of dreaming at imagined in the Chitza Itza pyramid led by Sergio Magana. This dream I had afterwards was connected to the second level of plants and in particular the lotus flower. The word for enlightenment is flowering. When we plant a lotus it is asking for enlightenment. Energy was unblocked to allow the flowering. Specific breathing, words and visualizations were done.  I also used the energy of the fourth level of the pyramid of Chitza Itza which included connection to the elements and brought in the rain to purify and colored winds.  In the last couple of years have created rainbows in dreams so asking for a particular color seems to be able to be done. I asked for red, blue and yellow wind.

Well when I got to the yellow wind lied down which was recommended which can bring beauty, knowledge and enlightenment.

Said the intention “Take me to dream with a flower.”

I thought of the Tibetan mantra “Om Mani Padme Hum” and repeated this also as I fell asleep.

The first thing I saw was clouds.. then a flower with a crystal inside. Then a star.. I brought in the colored winds as I was lucid and able to do so.

Then what I saw was a jaguar with firey yellow eyes that shone like the sun and were blazing.

a piece of paper to write on … as I often write just even a word in the dark to help remember the sequence.in the morning  This took me out of the dream.

I was determined to get back to the dream and worked had to be able to reenter – with visualizations but I seemed to have to go through darkness and change certain shapes by rain and colored wind.. finally I was there again

Then saw a mask that changed to a Raven mask and the person in it danced.. it them morphed to a shaman I worked with many years ago.

I then saw an eagle soaring which shapeshifted to also a shaman I had done many ceremonies with decades ago and was very close to.

I then saw a White Snowy Owl and it shapeshifted to a Producer who produced some of my stories in New York . I also was very close to him.

Saw a White Buffalo and it shapeshifted to my mum .. she always shared how important it was to be creative.

Fascinating that  all four of  people have passed to the Spirit World.. but they have all had an important part in my spiritual development.

All people I dreamt of were beautiful like flowers – different colors and traditions and cultures”.

The magental, mauve and lotus flower are by Dale Bertrand.

‘ To your flowering” Della Burford

Follow Create a Dream, with Della Burford on WordPress.com
Join 52 other subscribers 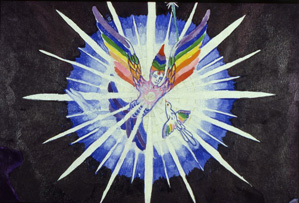